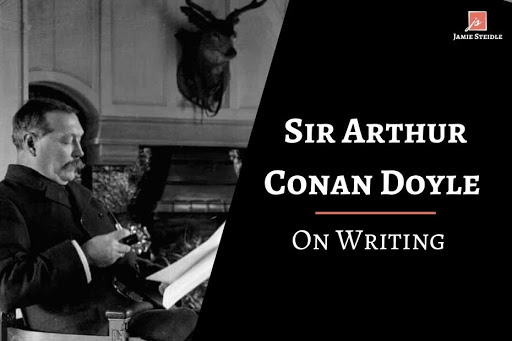 Sir Arthur Conan Doyle is most well known for creating the famous detective Sherlock Holmes. Doyle did such an amazing job creating Holmes’ character that many people to this day believe that Holmes was a real person. Here’s Sir Arthur Conan Doyle on writing stories that people believed. Maybe we can learn a thing or two from the great master.

The problem was that a few readers had sent Doyle letters questioning the soundness of Sherlock Holmes’ deduction in a short story. In The Adventure of the Priory School, Sherlock Holmes deduced that he could distinguish the direction of a bicycle by observing its tire tracks.

“This track, as you perceive, was made by a rider who was going from the direction of the school.”

“No, no, my dear Watson. The more deeply sunk impression is, of course, the hind wheel, upon which the weight rests. You perceive several places where it has passed across and obliterated the more shallow mark of the front one. It was undoubtedly heading away from the school. It may or may not be connected with our inquiry, but we will follow it backwards before we go any farther.”

After he received some letters in the mail, Doyle, himself, tried it out. That’s where we met him—on that day peddling his bike and looking to see what impressions he was actually making in the earth. Sir Arthur Conan Doyle wrote in his memoirs:

In “The Adventure of the Priory School” Holmes remarks in his offhand way that by looking at a bicycle track on a damp moor one can say which way it was heading. I had so many remonstrances upon this point, varying from pity to anger, that I took out my bicycle and tried. I had imagined that the observations of the way in which the track of the hind wheel overlaid the track of the front one when the machine was not running dead straight would show the direction. I found that my correspondents were right and I was wrong, for this would be the same whichever way the cycle was moving. On the other hand the real solution was much simpler, for on an undulating moor the wheels make a much deeper impression uphill and a more shallow one downhill, so Holmes was justified of his wisdom after all.

This incident with the bike tracks was discussed as recently as 2014 in The New York Times. It’s safe to say, it’s still a topic of contention.

In the article “How I Write My Books” published in The Strand Magazine in 1929, Sir Arthur Conan Doyle wrote in detail his theory and method for writing such compelling work:

“In short stories it has always seemed to me that so long as you produce your dramatic effect, accuracy of detail matters little. I have never striven for it and have made some bad mistakes in consequence. What matter If I can hold my readers ? I claim that I may make my own conditions, and I do so. I have taken liberties in some of the Sherlock Holmes stories. I have been told, for example, that in “The Adventure of Silver Blaze,” half the characters would have been in jail and the other half warned off the Turf for ever. That does not trouble me in the least when the story is admittedly a fantasy.”

Doyle had a different idea when it came to his historical novels. For those he wrote:

My system before writing such a book as “Sir Nigel” or “The Refugees” was to read everything I could get about the age and to copy out into notebooks all that seemed distinctive.

In the same work, he discusses the times that work best for him when it comes to writing:

“As to my hours of work, when I am keen on a book I am prepared to work all day, with an hour or two of walk or siesta in the afternoon. As I grow older I lose some power of sustained effort, but I remember that I once did ten thousand words of “The Refugees” in twenty-four hours. It was the part where the Grand Monarch was between his two mistresses, and contains as sustained an effort as I have ever made. Twice I have written forty-thousand-word pamphlets in a week, but in each case I was sustained by a burning indignation, which is the best of all driving power.”

Sometimes writing is about making mistakes. Even the good writers make them. It takes a great writer to get back on the bike and keep going.